Barstow’s Mojave XP Logistics Academy is bustling with energy under the new leadership of Principal Derrick Delton and Lead Teacher, Ms. Solveig Kruse.  Over the past few months, ITEP has been working closely with these educators to support their goals for Barstow High School, while also connecting them to the broader network of career academies throughout the state. 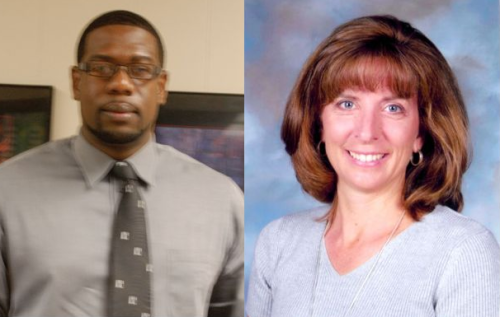 Derrick Delton has worked for Barstow Unified School District since 2001 and brings a wealth of experience to his role as Principal.  From starting out as a Math teacher at Barstow High School,  Delton has also served as a coach for the girls varsity basketball team, vice principal at the high school, principal for Cameron Elementary School, and principal for Barstow Junior High School.

Solveig Kruse was appointed Lead Teacher for Mojave XP in September, taking over for Gary Johnson who has led the Academy for the past three years.  Kruse was recently honored as a County Teacher of the Year.  Her expertise in teaching Business Math, Marketing and Entrepreneurship classes aligns perfectly with Mojave XP’s goal of bringing industry into the classroom.

ITEP’s COO Bonnie Bair assisted Delton and Kruse in receiving a thorough orientation to the California Partnership Academy (CPA) system by facilitating their participation and accompanying them to the CPA Fall Institute in Sacramento sponsored by the California Department of Education.  Joined by over 400 teachers from across California, Delton and Kruse were able to attend workshops and learn best practices in how to prepare high school students to succeed in both college and careers.  “The CPA conference was very informative. It gave me the opportunity to meet with colleagues from around the state and pick their brains on how to make our program more effective” said Delton.

ITEP is very pleased to help Mojave XP Logistics Academy continue on its pathway to success. “Barstow is well on its way. Principal Delton and Ms. Kruse saw that they were a part of a major educational reform movement and that CPAs really work… they were excited” said Bair.

ITEP, along with the Mojave XP Advisory Board, led by former Mayor of Barstow and BNSF Executive, Lawrence Dale,  has just launched  the ITEP Industry Coaching Program. This is the fourth of ITEP’s academies to work with “Coaches” from business and industry who meet for monthly sessions with students and cover topics including:  Academics Matter, Preparing for My Career, College Prep, and Business Skills/Leadership Development.  Companies including Desert Community Bank, Teamsters Union Local 166, Barstow Unified School District, Marine Corps Logistics Base, and Brubaker Mann have all been scheduled to participate. “This is an excellent opportunity to build a bridge between students and the business world, and it gives young people the possibility for asking questions that they would not usually be able to ask of industry professionals” said Reuel Herron, Branch manager for Desert Community Bank and Mojave XP Advisory Board member. This is what the students had to say:

“I liked the industry coaches because some of us didn’t know each other and they taught us to meet each other in a business way that was really fun.”  – David Green

“Thank you for sharing about your career and how you did it and the steps it took you to do it.  And you taught us that there is more to life after high school.” -James Silva

“Thank you for sharing with us about your jobs and how you got there.  I’m looking forward to hearing more from you guys.”  – Nikki Aaron

Congratulations Barstow High School and Mojave XP Logistics Academy.  You’re on the right track and ITEP is behind you all the way!